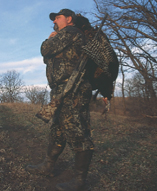 Making a good scatter on a flock of fall turkeys and then calling one back to the gun is a great way to get your bird. But scattering isn’t right for every hunter or situation.

Maybe you’re not as mobile as you once were. I’m going on 48, but I weigh less than I did in high school and can still move fast enough to bust up a flock. But what about 25 years from now? I’ll still be hunting fall turkeys. However, the birds might just chuckle through their beaks and walk away single-file at a slightly accelerated pace as I shuffle toward them for the “scatter.”

Maybe you have limited acreage to hunt. Scattering turkeys on a small tract of land might push the flock away for good. That was my situation the first season I hunted fall turkeys, during Wisconsin’s inaugural autumn hunt 22 years ago. I knew about scattering but didn’t feel comfortable doing it. Why send the turkeys over the hill, where there was another nice oak ridge and cut cornfield waiting for them? They might like the change of address.

Maybe you’re up for hunting fall turkeys without the scatter. Pursuing intact flocks is a satisfying way to get your fall bird. The challenge is appreciable, as is the satisfaction of a job well done. As the autumn chapters tally up in the book of my turkey hunting life, I look forward to hunting with these low-impact, high-success strategies every fall.

Food Factor
Besides survival, fall turkeys have one goal: to eat. With winter coming, every ounce of body mass a young bird puts on will help it get through tough times. And adult birds need to build their fat reserves. So figure out what and where birds are eating, set up there, and wait them out.

The feeding patterns of fall flocks change through autumn, so be flexible. During early fall, meadows, hayfields and pastures still attract birds for remaining insects and late-summer seeds. After frosts have knocked back the insects and grasses, surrounding grain fields get harvested. Head to cut corn and soybean fields. In timber country, oaks are critical. Interestingly, good mast years are harder to hunt than poor years, because poor crops concentrate turkeys near the few acorn-producing trees.
Hunting food sources is largely a scouting — and then waiting — game. Do your reconnaissance work. Glass fields to see where turkeys enter and exit. Set up there, or along a point or travel route they like to follow within the field. Tucking a blind into one of those spots or a secluded corner turkeys like is a good idea.

Be flexible, though, and move with the birds. If a new field gets picked, the turkeys might shift there to glean the new pickings. You should adjust locations, too. Hunt food sources during mornings and late afternoons.

Sneak and Yelp
In spring, you can cutt and run. Fall has its counterpart, which I call the sneak and yelp. The principle is the same: You move through likely cover, stopping occasionally to call and try and get an answer. However, the approach is different.

Sneak through the woods carefully and quietly, never skylining yourself. Stop every 75 to 100 yards to call. Lean up against a tree, put your box call or mouth call to work with some lost yelps — a string of eight to 16 — and try to get a turkey to answer.

For safety’s sake, always back up against a tree before you call. Be prepared to drop down to your seat and go to work immediately if a bird answers. Travel light, with just your gun, some water, a call or two, and a seat cushion. I like to use a fold-down seat that’s built into the turkey hunting vest for that kind of work.

The idea is to cross paths with a moving flock or happen upon birds at a loafing spot, so stop and call often. Though you’re moving, this technique is low-impact and won’t spook birds. It’s a good way to move through a section of land, perhaps locate some turkeys and do a little scouting while you’re at it.

Rile Up the Boss
No matter what the hunting situation — whether you’re waiting or trolling — calling an intact fall flock is one of turkey hunting’s biggest challenges. Of course, hunters know that yelping in a spring gobbler has its problems and hang-ups. Trying to get an obstinate boss hen to do something you want might be even tougher.

The trick is getting the goat of the old lady that’s leading a big fall brood flock. She’s the one you should target. If you hear a flock talking or get an answer, yelp back. Yelp like the loudest bird does. Cluck with attitude. Give her some sass. It’s fun. If she calls back, pour it on, and keep it up.

Kee-Kees are Key
Calling — and lots of it — is a big part of fall turkey hunting’s allure. In spring, we’re endlessly warned about what a bad idea it usually is to call often, loudly or aggressively. In most fall situations, the opposite is true. If you’re going to grab the birds’ attention, you won’t do it with a few clucks and purrs. There is a time and place for soft calling in fall, but most of the time you need to crank it up.

Yelps are your bread-and-butter call, but kee-kees — probably because they’re fun to make, but also because they can work wonders — are the chocolate cake. The kee-kee whistle is a three- or four-note whistling call that young turkeys make as they try to yelp: “kee-kee-kee.” The sound is easy to make on a mouth call, and you can buy kee-kee whistle calls.

When you’re set up — perhaps at a food source, or during a sneak-and-yelp pause — don’t leave without trying a few kee-kees. With their maternal instincts, hens are quick to respond. It’s like calling in a doe with fawn bleats. Make the whistles urgent. Really put some pleading and emotion in them to get birds coming your way.

Put Up a Fight
Fall turkeys are wary, to be sure. Other than eating, survival is their main job. But the birds of autumn are also inherently curious. One fact of life for an autumn turkey flock is the need to establish a pecking order. Young jakes are especially active, always jockeying for position and tussling with each other. Hens fight too, especially when there’s a challenge to the boss as sub-flocks come together into their big winter group.
Set up in some timber or other cover, and put on a fake turkey fight. As with a spring setup, you want to be behind a hill or around the bend of a tote road — a place where birds will be in range as soon as you see them.

Get a couple of calling tools going — a mouth call for sure, and then a box call or push-button fighting purr in one hand. Keep your shotgun propped on one knee and ready for action. Hit the calls hard with fighting purrs, mean clucks and agitated cackling. Shuffle the leaves with your feet.

If turkeys are nearby, they’ll often come running and rubbernecking in to see what’s happening and get in on the action. The technique is especially effective on gangs of young jakes, but brood flocks will also succumb. Like children in a schoolyard, turkeys want to gather to see a fight or join in.

Get Ahead
If sitting and waiting isn’t your game, or sneaking and yelping isn’t producing, you should get ahead of the game. The technique works well in open to partially open country, and also is effective where hills and elevations act as vantage points.

One of turkey hunting’s greatest sights is a bird walking toward you, not away. You might follow a flock all day, calling and pleading, but never turn them around. They’re not going to retrace their steps to come back. The only solution is to predict their line of travel and get ahead of them.

Roost Hunts
We hunt turkeys at the roost in spring. Fall is also a good time for hunting the roost, morning and evening. You can often pattern flocks of hens and young birds, at least in agricultural country where they’re working a food source. In big woods, turkeys might not go to bed at the same place every night, but they will follow a circuit and perhaps return every few evenings to a roost area.

In the morning, your best bet is to know the route birds take to food. Set up between them and the food. Again, it’s the get-ahead-of-them principle. You’re probably not going to call turkeys off the roost to a place they don’t want to go.

There’s often a lot of turkey chatter at the roost and right when birds hit the ground. It takes some communicating for birds to find each other and get together. You can call in a lone bird at those times, but you must start calling hard the moment they begin flapping out of the trees. Yelps are the best call to pull in young birds looking for mama.
Hunting the evening roost can be a good proposition, too. Get between an afternoon feeding area and the roost. Sneak in the back door if you have to. An evening hunt is usually a silent situation, because birds just don’t talk much then. You shouldn’t, either. Turkeys are very cautious while coming to the roost. If they’re veering off, though, you don’t have anything to lose by trying a few tender calls, such as soft clucks and contented purrs.

Conclusion
If scattering birds isn’t on your fall hunting agenda, or you’re looking for a new autumn challenge, you have good options. Put one or more of these seven strategies to work, and shoot your bird from an intact flock this fall. You’ll find special satisfaction in the pursuit and outcome.